Unfortunately we were not able to present the page in its correct original format simply because of a lack of funds to keep the code base for the more than 4,000 pages across multiple sites up to date and functioning correctly so that they can remain fully accessible to the public.

Link to Next potential 60 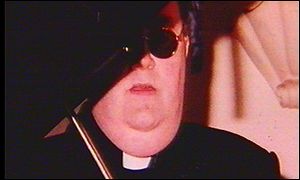 Fr Fortune was charged with 66 counts of sexual, indecent assault and buggery relating to eight boys.
The Catholic Churchdid not tell the locals that Fr Fortune was a brutal, predatorypaedophile. They organised delegations to two Bishops - wrote to thePapal Nuncio and the Vatican. The church promised it would dosomething. It never did.
Full programme transcript

Fr Sean Fortune, a newlyordained priest, appeared dashing and energetic when he first arrivedin the small Irish village of Fethard-on-Sea in County Wexford.

But what the locals did not know was that Fr Fortune already faced mounting allegations of child sexual abuse.

The Catholic Church kept this knowledge to itself.

Fr Fortune soon ensnared young boys of the village, relentlessly abusing and blackmailing many of them into silence.

When he was notcontrolling children in a myriad of carefully set up "youth groups", hewas pressuring their parents for money, stripping the elderly of theirsavings and extorting millions of pounds from government employmentschemes.

In Ireland, such was thepower of the Catholic Church, no one would dare to complain about apriest. But Fr Fortune's behaviour had become increasingly bizarre anddangerous.

In desperation hisparishioners organised a delegation to two Bishops and, after gettingno real response, wrote to the Papal Nuncio, the Pope's ambassador toIreland.

Still nothing was done to stop this bullying, predatory paedophile.

Colm O'Gorman was 14years old when Fr Fortune raped him for the first time. His tormentlasted for two and a half years. This year Colm returned toFethard-on-Sea with Correspondent.

He wanted to understandhow a priest could have a series of young boys stay overnight in hisparochial house without questions being asked.

"He would pick me up andbe the priest in front of my mother and my family and five minuteslater in the car he would make me perform oral sex on him and then fiveminutes after that ended, stop off and again be the priest and walkinto somebody's house with me in tow behind him. I just remember thereal sense of shock of it all."

Colm's journey back toFethard has been incredibly revealing. Many locals did not appreciatehis questions and he was made to feel unwelcome.

But those who did open their doors to him admitted that the abuse was well known both in the community and the church.

The courage to tell

Patrick Jackman was 11years old when he witnessed Fr Sean Fortune sexually abusing a youngboy scout in a tent. Four years later, the priest appeared at Pat'shome and asked if he could take the young boy to stay at his house forthe weekend.

Pat had a premonition of what was about to happen, but was powerless to stop it.

"There wasn't a phone inthe place. If I ran out screaming in the middle of the night, I didn'tknow where the nearest place was. I didn't know if I went and knockedon the door if they would wake up or if they did wake up whether theywould believe me or not. I had a terrible sense of being trapped andcaged. It was bloody horrible, absolutely horrible."

Unlike many of the boysabused by Fr Fortune, Pat had the courage to tell his parents. Hisfather was and still is close to the Catholic Church. He complainedpersonally to Bishop Herlihey. "The Bishop thought it was ludicrousthat a man of the cloth would act like that."

After the Bishop died, Pat's father complained to his replacement Bishop Comiskey.

To this day no one from the church has asked Pat Jackman about Fr Fortune or the events of that night.

Dr Brendan Comiskey, theBishop of Ferns, was informed of allegations of abuse against not justFr Fortune but a number of priests, when he was first appointed.

Throughout the 80s, thoseallegations increased. On at least two occasions, Bishop Comiskeyinvestigated, but came to no conclusions and did nothing to stop FrFortune.

Fr Sean Fortune was leftin Fethard-on-Sea for six years before Bishop Comiskey finally removedhim. He then sent Fortune to London to study media and communicationsand to seek therapy with a number of psychiatrists.

Two years later, FrFortune was brought back to Ireland, and given not only another parishand curacy, but also made the director of a Catholic mediaorganisation, the National Association of Community Broadcasting.

Fr Fortune quickly turnedhis new role to his financial and sexual advantage. He raped a 15 yearold boy in a studio booth where he recorded religious programmes.

The search for answers

Colm O'Gorman finallybrought Fr Fortune's reign to an end in 1995. Aged 29, he decided totell the Irish police about his experiences as a young boy. Colm fearedFr Fortune was still abusing.

The ensuing gardaiinvestigation resulted in Fr Fortune being charged with 66 counts ofsexual, indecent assault and buggery relating to eight boys. 18 yearsafter the first complaint, the Catholic Church was finally forced toremove him from duties.

But instead of reachingout to Fr Fortune's many victims, Bishop Comiskey disappeared from hispalace without explanation. It was discovered he had fled to an alcoholtreatment clinic in the US.

He returned to hisdiocese six months later. Bishop Comiskey claims that the ongoinglitigation prevents him answering the many questions about his and theChurch's knowledge of Fr Fortune's child sexual abuse.

The response so far

Bishop Comiskey did,however, tell Correspondent that he maintains an open-door policy forall victims of child abuse in his diocese and this is where he can makehis best contribution.

Fr Sean Fortune killed himself in 1999 in the first week of thecriminal trial denying his many victims their first chance to be heard.

The Catholic Church has never reached out in any way to the men in this film.

Colm O'Gorman, still hoping for some answers, is suing Bishop Brendan Comiskey, the Papal Nuncio and the Pope.

AMerseyside self help project run by and for the adult men who haveexperienced childhood abuse, especially those who have suffered whilein residential care. Fire in Ice aims to enable men who have sufferedchild abuse and their families to make positive change in their lives,also aims to make the care experience safe for children and youngpeople. Fire in Ice offers one to one, group and telephone support in afriendly empathic environment also works with non-abusing survivors inprisons. Fire in Ice is made up of ordinary men who have overcome theirabuse and want to help others do the same.

DerbyRape Crisis aims to promote the recovery of any adult of any gender whohas experienced rape or sexual abuse at any point in their lives.

It has been an honor and a privilege to provide more than 20 years of availability to those who seek further information on the reality of the global clergy abuse crisis in the Roman Catholic and other religions.

Contact me if you need assistance in locating specific pages or if you or someone you know sees the importance of keeping these pages active by assisting in keeping the full access to the sites information available to the general public.

A lack of denial is a terrifying thing to encounter by those still immersed in hiding from their own failings.

What's HOT on The FAQyMe Gene?

#457 4th Degree Oath of the Knights of Columbus

#504 Should failed religions be afforded funding and protection in Australia?

#466 JohnB and Ken using the World's most Powerful T-Shirt to Explore the Misogyny, Rape and Destruction of Natural Societies and more

Recently published on The FAQyMe Gene

#566 A Dabble into Dysfunctional Intergenerational Trauma

#565 You have been temporarily redirected - see below for details

#564 Do You belong to a Protected Supernatural Culture?

#563 Note to the world: Technology kids, Millenials and those raised with a mouse in their hand

#561 Marita Murphy and John Brown - what are they talking about?

You can directly support my work at PayPal John A Brown. Read more about John Brown here

Were you like so many others born into a constitutionally protected God based death and rape culture?

Copyright The FAQyMe Gene © 2022. Trauma in Religion - The JohnB Experience of Secular Survivorship in a Religious Rape and Cover Up Culture Site Map
IP Geolocation by geoPlugin