Unfortunately we were not able to present the page in its correct original format simply because of a lack of funds to keep the code base for the more than 4,000 pages across multiple sites up to date and functioning correctly so that they can remain fully accessible to the public.

It has been an honor and a privilege to provide more than 20 years of availability to those who seek further information on the reality of the global clergy abuse crisis in the Roman Catholic and other religions.

Contact me if you need assistance in locating specific pages orif you or someone you know sees the importance of keeping these pages active by assisting in keeping the full access to the sites information available to the general public. 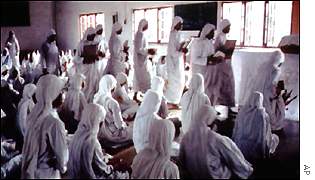 A day after the emergence of a reporton the rape of nuns by priests, the Roman Catholic Aid Agency, Cafod,has confirmed that it showed the Vatican the report seven years ago.

The leaked report said that priests and missionaries across several continents were forcing nuns to have sex with them.

On Tuesday, the Vatican confirmed that such abuse had been taking place, but denied that it was so widespread.

Among the abuses detailed is the caseof a nun being forced to have an abortion by the priest who impregnatedher. She later died and he officiated at her requiem mass.

The bishop, according to the report, subsequently relieved her of her duties.

In particular, the report singles outAfrica where priests and missionaries, wary of catching HIV, havetargetted nuns in a bid for safe sex.

The report, which was leaked torespected American Journal, the National Catholic Reporter, was writtenseven years ago by a nun and physician, Maura O'Donohue, who was thenAids coordinator for the Catholic Relief Charity, Cafod.

The charity says ithelped Sister O'Donohue take what it described as the "disturbingtestimonies" from nuns across the world to the relevant authorities,including the Vatican.

But it says neither Cafod nor theauthor, who still works for the charity in London, leaked it and it wasnever intended to be made public.

As such, it reinforces other reports of sexual abuse and the rape of nuns on the continent by their male colleagues.

In 1998, Marie MacDonald, head of theMissionaries of Our Lady of Africa, presented a similar study on"sexual abuse and rape committed by priests" to the Vatican.

According to the National CatholicReporter, she cites cases in 23 countries in Africa, Asia, Europe andNorth and South America.

The Vatican response has so far hasbeen one of denial that the problem is so widespread, and promises toinvestigate the issue internally.

Instead the Vatican was keen toemphasise the "often heroic faith" expressed by the large majority ofclergy and those in religious orders.

This sentiment was echoed by theMissionary News Agency, Misna, which while condemning the abuse,recalled that missionaries often work "in situations of extremepsychological and physical hardship."

That, however, will be cold comfort to those who have complained of a conspiracy of silence over the issue for several years.

They argue that the church hierarchy should have taken direct responsibility for the abuse, and stopped it.

A lack of denial is a terrifying thing to encounter by those still immersed in hiding from their own failings.

What's HOT on The FAQyMe Gene?

#457 4th Degree Oath of the Knights of Columbus

#504 Should failed religions be afforded funding and protection in Australia?

#466 JohnB and Ken using the World's most Powerful T-Shirt to Explore the Misogyny, Rape and Destruction of Natural Societies and more

Recently published on The FAQyMe Gene

#566 A Dabble into Dysfunctional Intergenerational Trauma

#565 You have been temporarily redirected - see below for details

#564 Do You belong to a Protected Supernatural Culture?

#563 Note to the world: Technology kids, Millenials and those raised with a mouse in their hand

#561 Marita Murphy and John Brown - what are they talking about?

Constant favorites on The FAQyMe Gene

#142 How aware are Australians of the truth of the cover up of the sexual abuse of children in 2018?

You can directly support my work at PayPal John A Brown. Read more about John Brown here

Were you like so many others born into a constitutionally protected God based death and rape culture?

Copyright The FAQyMe Gene © 2022. Trauma in Religion - The JohnB Experience of Secular Survivorship in a Religious Rape and Cover Up Culture Site Map
IP Geolocation by geoPlugin